How Does a 10X Investor Know When to Sell?

Wow, it’s a great day here in Baltimore. At InvestorPlace, we’ve all got a little extra spring in our step, the day after our big 10X Innovation Summit, in which over 17,000 people tuned in. I’d like to thank all of you who attended. This stuff really is my passion. So I appreciate everyone who made it such a successful event.

I certainly tried to bring my “A game,” and leave viewers with plenty of concrete, money-making steps to take. So after I reviewed the 7 mega-trends I’m most excited about now (plus one bonus megatrend!) — I also gave away my most recent stock pick for free. And, most importantly, I explained exactly WHY this stock fits into my strategy for 10X gains.

So, if you weren’t able to attend — or you just want to review my recommendations — click here to watch a full recording of the 10X Innovation Summit.

After I shared the stock that fits my 10X criteria now, we had a great Q&A session. I think I addressed most of the practicalities of buying stocks with 10X profit potential.

There’s Just One Thing I Would Add Today

The topic I would like to explore now is what happens AFTER you buy. In other words: How does a 10X investor stay disciplined…and stay patient?

Let me show you how with an example.

Since 10X gains are usually derived from huge, world-changing megatrends, we’ll look back at one of the biggest in recent memory: the rise of the internet.

Imagine it’s the early 1990s, when the internet was first being introduced. The more you learn about it, the more possibilities you discover.

You start to see how one day we’ll be doing just about EVERYTHING online — work, shopping, socializing, education…you name it. And you become eager to invest in this phenomenon.

As one of the few to understand the Internet Revolution in its very early days, you would know the select few stocks to buy.

You’d buy some Cisco Systems (CSCO), which supplied the actual gear these networks run on — basically, the “plumbing” of the internet.

You’d buy some Microsoft (MSFT), too. After all, in the 1990s, no one gets on the World Wide Web without their personal computers (PCs). Maybe you’d also pick up shares of another PC manufacturer: Dell Computer (DELL).

Within a few years, you’d have joined the ranks of the “dot-com millionaires.”

But there’s just one catch: None of these stocks went straight up. In fact, no stock does — especially in its early stages.

Here’s how CSCO would have looked a year into your investment: 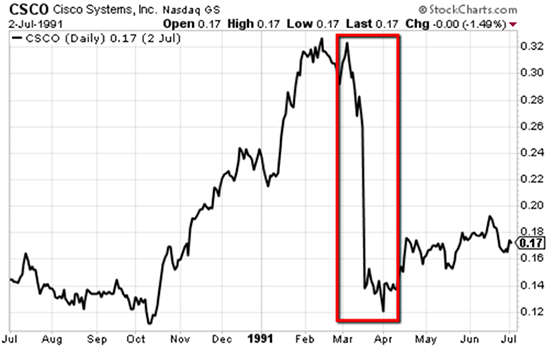 Not many people would have stuck around after that sheer drop in March 1991 — when several months of gains were erased in days.

But then, not many people would have enjoyed the meteoric rise CSCO then saw over the next four years: 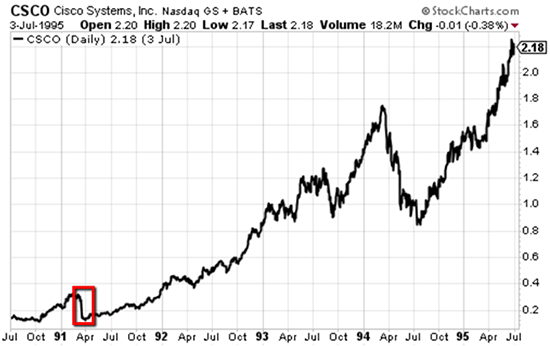 As you see, that initial drop ended up just being a blip. (It wasn’t even the sharpest correction CSCO stock ended up making, on its way to glory.) But no one knew that at the time!

So, if you’d cashed in after one year, you’d have made a modest profit on CSCO.

But if you’d cashed in a few years later – once the internet was becoming more fully adopted in businesses and households – that’s how you’d have turned $1,000 into $1,264,000.

The biggest winners tend to work just like that. An example I gave last night was Amazon (AMZN). 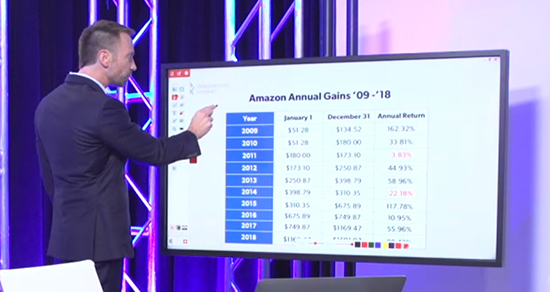 Here’s me during my presentation last night, showing the last 10 years of AMZN’s returns. As you see above, if you invested in AMZN, you had to take the good with the bad. And you had to have faith that, in the end, you’d come out 10X ahead. (In this case, you’d have made much more than that!)

But letting your investment ride can be one of the hardest things to do.

One of Lynch’s most famous quotes had to do with what he regretted most in his career: “I always sold stocks way too early.”

I’m sure you can relate. I certainly can.

I felt the same way about my investment in Intuitive Surgical (ISRG).

My Own “Peter Lynch Moment”

Intuitive Surgical was one of the first stocks I bought for clients, back in 2004. It wasn’t widely known, but the company was a pioneer in the brand-new field of surgical robotics. So, it fit a major theme for me: next-generation healthcare. We bought around $15 per share – and within a few weeks, it was at $20!

I went ahead and sold ISRG, and we took that profit to the bank. And you know what? My clients were happy with that. It was a 30%+ return in a short time. But guess what? ISRG is up to $525 today. (And that’s even after a 3-for-1 stock split.) 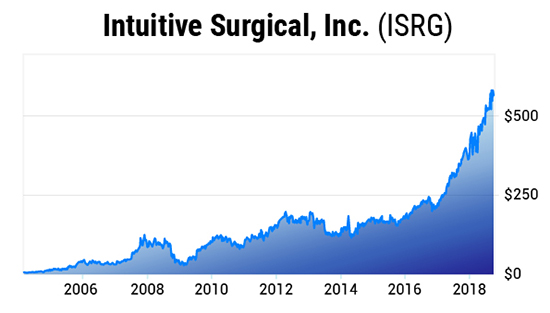 I wished I’d been less focused on possibly losing the gains we had…and more focused on why ISRG was a good investment, long-term. If I had – if we’d held on through the financial crisis, the Obamacare controversy, and everything else – we’d now have a 10,400% profit!

I say this not to brag, although I definitely am proud of these results. But I just want to show you that 10X gains really are possible. In fact, they’re expected…

…if you get on board a big, game-changing trend — while it’s in its very early stages.

P.S. Let me leave you with one final, related thought:

A smart investor does not worry about “picking stocks.” They worry about picking trends! And once you get to know that trend inside and out — the major players, and the smaller imitators who are just hanging on for the ride — the right stocks reveal themselves.

Folks, that is what my 10X Innovation Summit is all about. So I won’t take up any more of your time. Go ahead and check out the replay now, and I look forward to talking to you again soon.

How to Make Huge Profits From the Shift to Transportation 2.0

The car as we know it is on the verge of a transformative change not seen since Karl Benz invented it nearly 135 years ago. In fact, the whole transportation sector is now poised for its version of 2.0.

I’m not exaggerating when I say this will lead to trillions of dollars in money sloshing around in the coming decades. What is coming will create one of the five biggest investment opportunities you’ll ever see in your life, no matter when you were born. Learn more here.

Marijuana has been outlawed most everywhere for decades… but now a wave of legalization is starting to sweep the world. This will create massive new markets and massive stock market winners. Learn more here.

The next big breakthrough in battery technology is an innovation that will have multi-trillion-dollar economic implications. I can tell you this mega innovation isn’t a matter of “if,” it’s a matter of “when,” and I believe it will go down as one of the greatest inventions of the 21st century.

Those on the right side of this innovation stand to build incredible wealth… just like people did from the creation of the internet and the smartphone. Think of this as your “field guide” for profiting from the next big battery breakthrough. Learn more here.