Whenever I get to talking to people about investing in China, we always end up discussing its massive growth numbers.

How is China able to put up 6% economic growth… when other nations are happy with 2%, and some can barely make 1%?

The answer is simple. It’s because China is in the business of creating entirely new, world-class industries. The Chinese government sets massive goals – and pursues them aggressively.

That kind of dizzying growth would be pretty unrealistic in a free economy, but China is different. It likes to create “national champions”… huge companies that have the backing of the government. In fact, the two biggest publicly traded companies in China – Industrial and Commercial Bank of China (IDCBY) and China Construction Bank (CICHY) – are both owned by… the Chinese government.

This is important because of the rare and potentially huge opportunity we talked about in yesterday’s MoneyWire. The government’s stated goal for Chinese biotechnology is for it to constitute 4% of its economy by next year. That would mean 116X growth!

In my two decades of financial research, I’ve never witnessed a government fully committed to such a tiny sector of the markets.

But projections are one thing. Real numbers are another. When I hire someone, I want to know what they can do for me – and also, what they have done in the past.

The same is true when analyzing possible investments, especially ones with massive potential.

So, today let’s look at China’s track record… and how government support has translated into outsized profits. The push in biotechnology isn’t the first time the government has backed an industry with what appear to be unrealistic goals.

Ten years ago, China’s government was determined to grow the nation’s technology industry. It was a great opportunity for investors.

At the same time, a little-known technology company was starting to gather assets and extend its tentacles into all aspects of tech. It was a major beneficiary of the government’s support. Today, Tencent Holdings (TCEHY) is one of the largest companies in the world. At one point last year, its valuation topped $550 billion. It was even mentioned as one of leading candidates to be the next trillion-dollar stock behind Apple (AAPL) and Amazon (AMZN).

Tencent rose an eye-popping 67,000% from its IPO in 2004 through January 2018, before it was hit with the Chinese stock market sell-off. Those are life-changing returns.

Shares rallied since their low in October 2018. The company’s market capitalization is back up to roughly $400 billion, so even with last year’s sell-off, the gains in Tencent and other Chinese technology companies helped make average investors wealthy.

In Early Stage Investor, another great example I often talk about is China’s legendary infrastructure boom. The government pumped massive amounts of money into infrastructure when the Asian financial crisis hit in the late 1990s and again during the global crisis a decade later.

It helped the economy, but it was also overboard. So much so that it resulted in dozens of “ghost cities” throughout the country. The majority of them are beautiful, but practically nobody lives in them.

It was still great for smart investors who recognized what was going on. PetroChina Company (PTR) was just one of the winners during the infrastructure boom. This massive growth was largely powered by this one, large energy company, and its stock grew 17X from its IPO in 2000 through the high in 2007.

If you think that’s impressive, take a look at Anhui Conch Cement (AHCHY). As you can tell by the name, the company makes cement and aggregates used to build roads, houses, etc. all over China. This stock was trading at a mere $0.17, and today it is at $30. That’s a 176-bagger!

Now you can see why I stopped in my tracks when I saw how strongly the government is pushing China’s biotech industry. It is determined to put the industry on the same level with U.S. biotech… and do it in just a few years. And history shows us that the Chinese government tends to get what it wants.

But that’s not the only reason I’ve got my eye on biotech as the best China play.

Around the world, there is a massive demographic shift going on. Statistically speaking, humanity is aging at a rapid pace.

That’s certainly true of China, whose people suffered from the “one-child policy” for a good 35 years. Because of this, China’s median age will be 47 years by 2040 (second only to tiny Monaco).

And also because of this, the massive population of China will need more trips to the doctor’s office – and more prescriptions… and more medical devices. Tomorrow, we’ll take a closer look at China’s major health concerns, the massive government spending required to solve them, and the companies that will facilitate this.

P.S. I don’t mean to imply that I’m some huge fan of big government. But I will say that, from an investing point of view, overzealous government spending in China is a good thing.

That actually makes opportunity in Chinese biotech one of the SAFEST and MOST LUCRATIVE investments I’ve ever uncovered.

Every once in a while, an investment opportunity comes along that offers up so much upside — and so little downside — that you’d have to be crazy not to take advantage of it.

And that’s exactly the opportunity I’m presenting to you today.

You don’t have to have a degree in finance or years of experience on Wall Street to see that this might be the easiest way to make life-changing profits by this time next year – if you get in early. I have all of the details for you here, including how to get started.

Click here to listen to Matt McCall’s MoneyLine podcast! This week, Matt talks about Virgin Galactic (SPCE), the first publicly traded space exploration company. Is it a good investment opportunity? Then, Matt shares his thoughts on two high-growth food stocks that got crushed this week after earnings. The show wraps up with a discussion about stocks at all-time highs and Matt’s view on why everyone can become a successful investor.

You can subscribe to this podcast on iTunes, Stitcher, Spotify, or wherever you listen to podcasts.

How to Make Huge Profits From the Shift to Transportation 2.0

The car as we know it is on the verge of a transformative change not seen since Karl Benz invented it nearly 135 years ago. In fact, the whole transportation sector is now poised for its version of 2.0.

I’m not exaggerating when I say this will lead to trillions of dollars in money sloshing around in the coming decades. What is coming will create one of the five biggest investment opportunities you’ll ever see in your life, no matter when you were born. Learn more here.

Marijuana has been outlawed most everywhere for decades… but now a wave of legalization is starting to sweep the world. This will create massive new markets and massive stock market winners. Learn more here.

The next big breakthrough in battery technology is an innovation that will have multi-trillion-dollar economic implications. I can tell you this mega innovation isn’t a matter of “if,” it’s a matter of “when,” and I believe it will go down as one of the greatest inventions of the 21st century.

Those on the right side of this innovation stand to build incredible wealth… just like people did from the creation of the internet and the smartphone. Think of this as your “field guide” for profiting from the next big battery breakthrough. Learn more here. 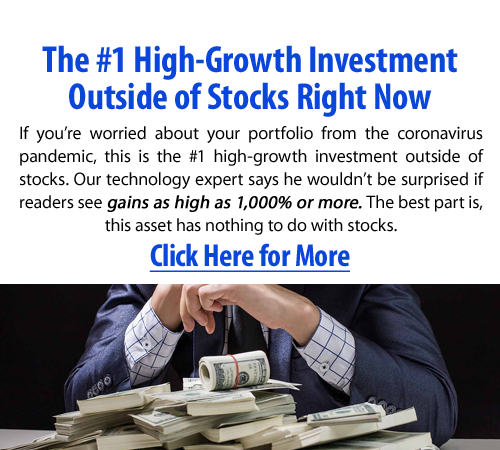